A list of ten beautiful bible verses which inspire prayer - in no particular order! On this page you can learn how Jesus taught us how to pray, read the moving prayers of St Paul in his letters, and explore the depth of King David’s prayers in the psalms. Be uplifted as you read these wonderfully inspiring prayers!

"And when you pray, do not be like the hypocrites, for they love to pray standing in the synagogues and on the street corners to be seen by others. Truly I tell you, they have received their reward in full. But when you pray, go into your room, close the door and pray to your Father, who is unseen. Then your Father, who sees what is done in secret, will reward you. And when you pray, do not keep on babbling like pagans, for they think they will be heard because of their many words. Do not be like them, for your Father knows what you need before you ask him."


In this passage Jesus is teaching His disciples how to approach prayer. Note that God is not impressed by many words, or by those who want to appear spiritual by being seen to pray. Rather, prayer is about a simple relationship with God. He already knows what we need. Jesus encourages us to ask, seek and knock on the door of heaven. prayers on this page

“Prayer is not learned in a classroom but in the closet.”

This, then, is how you should pray:
'Our Father in heaven:
May your holy name be honored;
may your Kingdom come;
may your will be done on earth as it is in heaven.
Give us today the food we need.
Forgive us the wrongs we have done, as we forgive the wrongs that others have done to us.
Do not bring us to hard testing, but keep us safe from the Evil One.'

A creative multi-lingual interpretation of the Lord's Prayer:-

“I am no more in the world, but these are in the world, and I am coming to you. Holy Father, keep them through your name which you have given me, that they may be one, even as we are."


Christ's prayer for the Church

Christ's prayer for his disciples is a very simple one - that they would be one - in heart and mind, just as God is. The most ancient confessions of the church are that God is to be worshipped as three persons. The very nature of God is one of diverse unity:-

• Diverse because each of the persons of the Trinity have very different roles and attributes. E.g. Jesus is a man, who has experienced everything that it means to be human (e.g. hunger, suffering, death). The Holy Spirit is associated with the power of God (Romans 8:11 declares that it was the Spirit of God that raised Jesus from the dead.)

• Unified - God is one being. Christians do not worship three separate God's, but one God in three persons (see the Nicene Creed). God's will is that His people reflect this nature in marriage (the two shall become one, Gen 2:24) and through the church.

“But Stephen, full of the Holy Spirit, gazed steadily into heaven and saw the glory of God, and he saw Jesus standing in the place of honor at God's right hand. .... As they stoned him, Stephen prayed, "Lord Jesus, receive my spirit.""


The Stoning of Stephen

For a pray to be powerful it doesn't have to be long or complicated. Remarkably, the Holy Spirit was so present with Stephen that he was able to maintain his focus on his God and saviour Jesus as he was stoned to death by the Jewish leaders. His simple prayer for Christ to receive his spirit echoes Christ's own death, where He cried out "Father, into your hands I commit my spirit" (Luke 23:46) “For this cause I also, having heard of the faith in the Lord Jesus which is among you, and the love which you have toward all the saints, do not cease to give thanks for you, making mention of you in my prayers, that the God of our Lord Jesus Christ, the Father of glory, may give to you a spirit of wisdom and revelation in the knowledge of him; having the eyes of your hearts enlightened, that you may know what is the hope of his calling, and what are the riches of the glory of his inheritance in the saints, and what is the exceeding greatness of his power toward us who believe, according to that working of the strength of his might which he worked in Christ, when he raised him from the dead, and made him to sit at his right hand in the heavenly places, far above all rule, and authority, and power, and dominion, and every name that is named, not only in this age, but also in that which is to come. He put all things in subjection under his feet, and gave him to be head over all things for the church, which is his body, the fullness of him who fills all in all "

Paul's prayer for the believers in Ephesus is that they would fully know and experience the great power that is at work within them - the same power that raised Christ from the dead.

“My response is to get down on my knees before the Father, this magnificent Father who parcels out all heaven and earth. I ask him to strengthen you by his Spirit-not a brute strength but a glorious inner strength-that Christ will live in you as you open the door and invite him in. And I ask him that with both feet planted firmly on love, you'll be able to take in with all followers of Jesus the extravagant dimensions of Christ's love. Reach out and experience the breadth! Test its length! Plumb the depths! Rise to the heights! Live full lives, full in the fullness of God.

God can do anything, you know-far more than you could ever imagine or guess or request in your wildest dreams! He does it not by pushing us around but by working within us, his Spirit deeply and gently within us."

“Don't worry about anything, but pray about everything. With thankful hearts offer up your prayers and requests to God. Then, because you belong to Christ Jesus, God will bless you with peace that no one can completely understand. And this peace will control the way you think and feel."

Paul's teaching on prayer and worry can be compared with Christ's words in the Sermon on the Mount about anxiety and God's provision - Matthew 6:25-34 NIV

A beautiful reading of bible verses which all reflect on the nature of God's peace. (This video includes Philippians 4:6-7):-:- 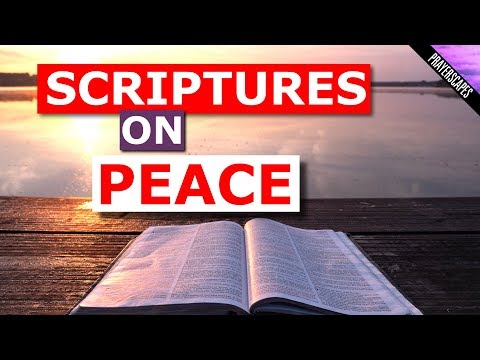 “But can you, O God, really live on earth? Not even all of heaven is large enough to hold you, so how can this Temple that I have built be large enough? LORD my God, I am your servant. Listen to my prayer, and grant the requests I make to you today. Watch over this Temple day and night, this place where you have chosen to be worshiped. Hear me when I face this Temple and pray. Hear my prayers and the prayers of your people when they face this place and pray. In your home in heaven hear us and forgive us."


Solomon's dedication of the Temple

Note the humility with which Solomon prays and gives the Temple to the Lord. A useful prayer for dedicating new church buildings to God.

A beautiful scripture for praying for others with and blessing them with God's peace:- “Where could I go to escape
from your Spirit
or from your sight?
If I were to climb up
to the highest heavens,
you would be there.
If I were to dig down
to the world of the dead
you would also be there.
Suppose I had wings
like the dawning day
and flew across the ocean.
Even then your powerful arm
would guide and protect me."

A prayer to say to remind you that God is always with you - no matter what you do or where you go.

Other notable prayers in the bible

Colossians 1:9-12
The Apostles Paul's prayer for the Colossians to know God's will.

James 5:13-16
The prayer of faith - James's instructions to church leaders for healing of the sick.