The 'Glory Be' Prayer
Glory Be To The Father (Gloria Patri)


Glory be to the Father,
and to the Son,
and to the Holy Spirit.
As it was in the beginning,
is now,
and ever shall be,
world without end.
Amen.

Did you find this prayer useful? If so, you may also enjoy the prayer of St Francis.

The "Glory Be"
(Printable Prayer Image) In the silence of the heart God speaks. If you face God in prayer and silence, God will speak to you.

The meaning of "Glory Be"

"Glory Be" is known by it's Latin name "Gloria Patri" ("Glory to the Father"), and is also referred to as the 'minor doxology' (the 'greater doxology' being "Glory To God in the Highest", in Latin "Gloria in excelsis Deo").

The "Glory Be" is a doxology.

A doxology is a short confession of worship to God, which can be spoken or sung in the form of a hymn. "Glory Be To The Father" encapsulates the essence of the Christian faith - that God is revealed in three persons - The Father, Christ the Son, and the Holy Spirit. Each are to be equally worshipped and revered. The prayer also reveals God as eternal - He is before all things, is present in the 'here and now', and will always be. This is consistent with the writings in both the Old and New Testaments. In the book of Isaiah, God says of himself "I am the first and I am the last; " (Isaiah 44:6, NIV), in the New Testament, Jesus says of himself "I am the first and the last". Also in the Book of Revelation, both Almighty God (the Father) and Christ (the Son) refer to themselves as the Alpha and Omega (the first and last letters of the Greek alphabet). Compare Revelation 1:8 with Revelation 22:12-13.

Another famous proclamation of the Christian faith in the Trinity. An inspiring contemporary reading of this ancient creed:- 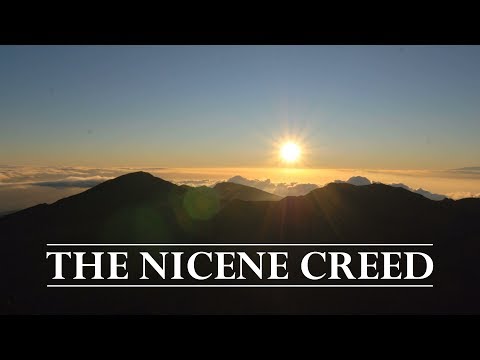 "Glory Be" in the Catholic Faith

The practise of the "Glory Be" prayer in the Catholic Church:-

• In the catholic faith, it is common practise to make the sign of the cross whilst this prayer is recited.

• The prayer also forms part of the "Rosary" - a sequence of prayers which also includes the "Lord's Prayer" and the "Hail Mary".

The Anglican tradition has a similar prayer with slight variations in the wording:-

Glory to the Father
and to the Son
and to the Holy Spirit;
as it was in the beginning
is now and ever shall be.
Amen.